Ethanol as a raw material

Ethanol | Ethanol as fuel and a raw material

Ethanol for the environment for over 100 years

Ethanol has been produced for over 100 years in Örnsköldsvik’s biorefinery area. Ethanol was the residual product obtained in the manufacture of pulp. Today, special viscose is manufactured and the ethanol is classified as a sustainable raw material.

Sekab is also in this area and our main raw material is ethanol. We refine ethanol into a range of base chemicals and chemical products. We also develop new technologies for the production of ethanol from cellulose-based biomass such as residues from the forest and sawmill industry.

The application areas of ethanol are many, and in principle everything that today is made from oil can instead be made from ethanol.

Ethanol can be produced partly through biological processes such as fermentation and partly synthetically. The synthetic production of ethanol takes place in the oil industry using oil as a raw material. The method entails that water is catalytically applied to ethylene. The end product is fossil-based ethanol. The biological production of ethanol takes place using a cellulose-based raw material and provides bio-based ethanol.

Bio-based ethanol is a good choice for the climate and the environment and all ethanol produced today from fossil raw materials could instead be made from renewable and biological raw materials.

This ethanol is classified as second-generation ethanol since the raw material used is a residual product from already existing production, in this case special cellulose for viscose. In everyday language it is also called forest ethanol. First-generation ethanol is produced from agricultural products such as sugar cane, cereal or corn.

Today, Sekab uses this ethanol to provide a range of premium products within both the chemical field and fuels. These products are renewable, durable and have extremely good climate characteristics.

Second-generation ethanol has two major benefits. Firstly, it provides enormous climate benefits compared to fossil fuels, even greater than regular bioethanol. Secondly, there is no risk of it competing with food production because it is produced from a residual product.

This is one of the reasons SEKAB has developed a dedicated process for the production of ethanol from various types of biomass and wood raw materials, a process with very broad applications. Already today, we see a great demand for and interest in second-generation ethanol and we want to see large-scale production as soon as possible.

Ethanol can be used as biofuel in buses, lorries and private cars. In industry, ethanol is an important raw material in the manufacture of a variety of chemical products.

Today, ethanol is by far the most widely used biofuel in the world and it plays an important role in reducing traffic’s climate impact and dependence on oil. Both the production and the use of ethanol are today most common in the United States and Brazil. In Sweden, in principle all standard petrol sold contains approx. 5 per cent low-blended ethanol. 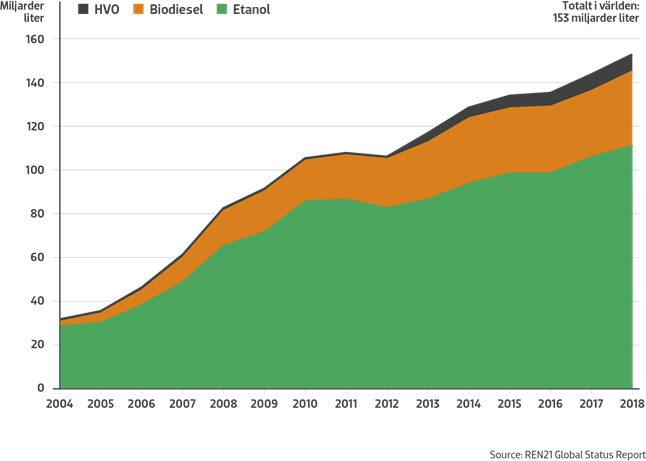 7 million m3. The raw material base is limited; there are just over 10 producers.

34 million m3. The raw material is rapeseed; production takes place all over the world.

112 million m3. The raw material base is wide, all countries have some kind of raw material and there are around 1,000 producers.

The E85 and ED95 biofuels consist mostly of ethanol. E85 is used in private cars with flexifuel engines adapted for ethanol use. Today, E85 is available at all major fuel stations in Sweden.

Heavy vehicles such as lorries and buses can be run on ED95 biofuel which contains 95 per cent ethanol and 5 per cent ignition enhancers and lubricants. ED95 is used in customised diesel engines and can reduce heavy traffic emissions of carbon dioxide by up to 87 per cent, compared to diesel.

Ethanol is also a common raw material in the chemical industry and is an important component in paints, cosmetics and pharmaceuticals. Pure ethanol in high concentrations is used as technical ethanol and as an ingredient in solvents, among other things. For example, the solvent ethyl acetate and the base chemical acetaldehyde are produced from biologically produced ethanol at SEKAB’s plant in Örnsköldsvik. Furthermore, ethanol is used in windscreen washer fluid and thermol.

As oil needs to be phased out to climate-secure our society we will lose an important raw material. Oil is found in countless materials that we today regard as self-evident, it builds our houses and it powers our vehicles.

New sources of energy and raw materials are needed to meet declining oil production. Sekab has developed a process for the production of ethanol from cellulose, a raw material that is available in virtually unlimited quantities. Ethanol is a versatile chemical that can replace oil both as a fuel and as a raw material in many chemical processes. 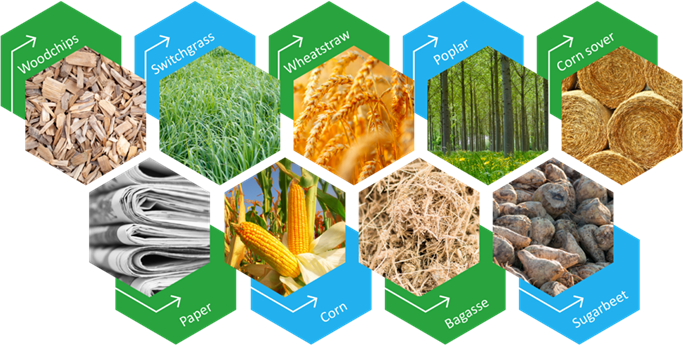 Cellulose is a renewable raw material

Cellulose forms part of almost all plant materials and is the most common organic material on the planet. It consists of long chains of sugar molecules that are very difficult to break down. For 20 years, Sekab, together with researchers from the universities of Umeå and Luleå, has developed a process that, with the help of heat, weak acids and enzymes, can break the sugar down out of the cellulose and convert it into ethanol. The great thing is that all countries have some form of cellulose-based biomass that can be processed into ethanol.

Food and fuel in the same field

The cellulose process provides many benefits. One of the most important ones is that residues from agriculture and the forest industry can be utilised and all countries have some form of cellulose-based biomass that they can use. If the straw is used instead of the grain from the wheat when the cereal is harvested, no food is used in the production of ethanol. In the sugar industry, what remains of the sugar cane is called bagasse. If it is also used to produce ethanol, production per hectare can be increased from 8,000 to 12,000 litres – a full 50 per cent. There are numerous raw materials, everything from wood chips and paper scraps to bagasse, corn scraps and straw can be used.

Cellulose ethanol provides great benefits in the form of better-utilised land and higher energy yield. The process can also be combined with a thermal power plant to make electricity and heat from the residues or a biorefinery for biogas production. Then as much as 85 per cent of the total energy content of the raw material can be utilised.

The demoplant in Örnsköldsvik is one of the most advanced in the world and Sekab’s patented processes have been refined here for a long time. We offer our customers the know-how and experience required to build a full-scale and customised facility that is optimised to meet their needs to produce ethanol, lignin or sugar.

We also carry out development work with several different partners and customers, who, with the help of our facilities and in-depth knowledge, can test the potential of raw materials, enzymes and yeast types. Feel free to contact us for more information – the chances are that we have common goals.

For us at Sekab, it is absolutely clear: cellulose ethanol will be an important part of a fossil-free future.